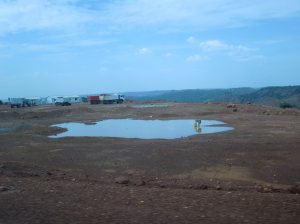 getting water from the first rains in Tigray, Ethiopia

Women know all about fermentation. They make beer and bread for generations. They have the skills to brew fertilizers. But women spend up to 6 hours a day on the average collecting water. Collecting rainwater task giving time to start a business, for example to brew organic fertilizers.

There is no African landscape without women carrying heavy loads of water.The lack of infrastructure for water supply in rural areas, forces women walk to fill their Jerry-cans and carry them for kilometers. A 20l Jerry-can is not enough for the household thus often the trip to the water source has to be done two or three times a day leaving no time for other things.

It is a fact. Soil fertility projects as well as many other development projects need to deal with the burden of lack of labor. Contrary to what it is normally reported the biggest burden is time, not skill. Women master the art of making honey wine, beer or cheese. During the workshops we find that women are much more aware of the process than men.  They can make compost and brew bio/fertilizers easily. They have the skill they just need to adapt it to soil.

Actually, on the average, a women spends 4,5 hours/day to carry water.water housekeeping and children. This leaves no time for something else. Saving some time to eliminate the burden of the time could allow women to make fertilizers, for themselves and even for their communities. But how to save  time?

We can make time in two ways: First, by using composting techniques that require less labor to compost (heap system) and the second is to less time in transporting water by harvesting rainwater.

A simple rain water harvesting water system of 1.000l. could save at least 550 wo-men hours. If only the half of this time would be used to produce and apply organic fertilizers at house hold (or community level) every single household could produce more and better food.

Moreover the quality of rainwater in rural areas is much better than any surface water source and many ground water sources.  Rainwater is a resource underused. A 1000 water tank, some pipes and a water-filter means an investment of 200 euro, per household (one year salary of a farmer). Where credit is not an option, the quest for cheaper designs reusing local materials, seem to offer the most promising alternative.